Where grass once grew – the last nomads of Figuig

Nomads in the Figuig region are used to harsh living conditions – but never have they been as harsh as today. The climate crisis might make nomadism impossible soon.

Abdellatif* kicks against something which looks like a rock, but as soon as his foot touches it, it falls apart into a thousand grains of sand. Cracks run through the yellow-coloured ground and divide the earth into irregular geometric shapes. Every step makes a sound as if dry bread was crushed. Not long ago, there was grass here. Not long ago, Abdellatif was only one of many nomads living in the region of Figuig, Morocco. Today, he is one of the last to remain.

The hours he spends in the desert sun and wind every day have traced deep wrinkles in his face. The fabric of his white dress moves in the light wind, as he pokes a stick into some sand on the ground. It is the same dress his parents, and before them his grandparents wore. He has come to this riverbed to feed the herds ever since he was a child. “The goats,” Abdellatif explains, “are the least demanding ones. They always used to find food”. Sheep are pickier, they need grass. But in the last three years, everything has changed. “This drought is a catastrophe”, he says. Not even the goats find enough leaves on the bushes, enough grass between the cracks in the earth to feed on. He must feed them at home, with fodder from the market. The drought changes everything.

Abdellatif is a descendent of the Aâmor tribe, who has populated the region north of Figuig for centuries. Further in the west, the territory of the Bni Guil tribe begins. Originally, the families used to pack their tents, gear, and herds and move within the region every few months, whenever there was no more grass. In exceptional cases, a family could stay longer at the same place, but rarely more than a year. “There were almost small villages of nomads. In this region, there used to be 40 or 50 families”, Abdellatif explains. On the souks of Figuig or Bouarfaa, trade was thriving. Different tribes and families would meet and deal with sheep, goats, dromedaries, milk, cheese, and wool. The sheep of the Bni Guil tribe were especially demanded, as they were the most robust. “Today, you see one family every three to four kilometers.” They built small huts of bricks to protect themselves from the cold at night. There is no point in moving anymore. The grass has disappeared everywhere.

Nomads all over Morocco face a long history of segregation and marginalisation: Once well-respected, numerous and powerful, they became unwanted during the French colonialist period. Their lifestyle contradicted modernism – says one perspective. A different perspective tells a story of thirst for power: Because the nomads moved from one place to another every few months, they were difficult to put under control – control that was central for the French colonial rule.

The protectorate has ended, but the life of the nomads has not become easier. Since 1994, the border with Algeria is closed, which cuts off an immense area where grazing was once possible, and oasis towns where animals could be traded. Within Morocco, public lands are increasingly privatized and cities grow to a point where there is no more space remaining. Houses are built where goats once roamed. 50 kilometers from the closest oasis town, Figuig, and 850 kilometers away from Rabat, the region is far from being a priority to policymakers. But amongst all those difficulties, the last four years were the hardest. “Jfef” came – the drought.

The sun is about to set when the silhouettes of five dromedaries appear on the horizon. Winds churn up sand. The dromedaries’ humps rise and fall through the dusty air like boats on a rough sea. The temperature has cooled down, and the colors change from bright yellow to warm red. As the dromedaries approach the camp, their outline becomes sharp. Slowly a herd of goats and sheep appears behind them. It is Halim, Abdellatif’s nine-year-old son, who brings them back home after a day in the desert. He carries a bag with a small bottle of water around his shoulder, plastic sandals on his feet, an old beanie on his head, a wooden stick in his hand. When he left this morning, the sun had just risen. His mission was to find food for the sheep, goats, and dromedaries. But he had no success.

In the camp, a dog, tied to a post, is first to notice the troops on the horizon. He starts barking, pulls on its leash, runs frantically around the post he is attached to. Hectic arises. Everyone moves. Abdellatif rushes into the small brick hut, the two younger daughters, Rajia, 8, and Zineb, 10, run to the small stall and open the gates. The family performs a precise choreography rehearsed many times before. The herd is now only a hundred meters away, 148 animals. The wind has picked up and whips sand on arms and faces. Blows it into squinted eyes. The thick dust in the air makes it hard to see further than a few meters. Abdellatif carries two plastic bags out of the hut, each one shoulder height. It is fodder for the animals. He must lift both arms high above the head to pour it into the feeding throughs. Then he rushes back into the hut to get more. The dromedaries will be fed a few meters up the hill behind the camp. Behind them, two donkeys are tied to a post. They are also waiting for food. Arwa, the oldest daughter, heads out to meet her brother and helps him lead the troops to the camp. She carries a stick in her hand and a red scarf tied tightly around her head.

It is not long until the first sheep come running and stick their heads deep into the troughs that have been filled only seconds earlier. They quickly form a circle around the trough, hurrying to wolf down as much as possible, as fast as possible, before the others do so. The mass of woollen bodies soon starts to look like one single organism, with feet pointing out in all directions. As soon as one loses its hard-fought spot, it squishes back in between the other woollen bodies, steps on top of the others, if needed. The wind carries away their baas.

“Back in the days, they would find enough food out there,” Abdellatif says. “I did not need to feed them anything.” Now, he estimates, they can find a third of their food out there at best. “Taking them out is more about making them move today.” Looking for food makes no sense anymore. There is no more grass to be found. The climate has changed too much.

Climate change, scientists say, means more and more intense extreme weather events. It means crossing tipping points in the climate system that fundamentally and irreversibly alter its functioning. It means moving the climate system into a new state, a state that potentially leaves no space for the climatic privileges of the Holocene, the geological era in which humankind was able to flourish. A state that might impede many to live a dignified life. What is still dismissed as alarmist and dystopian by some has long become reality for those less privileged.

2020 was Morocco’s hottest year on record, with rainfall deficits across the country.  In 2021, a severe heatwave broke numerous temperature records, with maxima reaching almost 50 degrees in Oujda, Al Massira, Taroudant and Fez. 2022 brought with it the most severe drought in 30 years, with rainfall 64% below average, as Reuters reports – by June.

Every few weeks, Abdellatif needs to buy fodder for the animals from the Souk. It is imported from far, from Oujda, or even from other countries. “Chmender”, a fodder made of dried sugar beet that is then sogged in water, and “Nekhala”, a by-product of wheat. 2015 was when he had to start buying additional food, he remembers. But the drought hit farmers too. Since 2015, the prices for fodder have doubled. The drought makes the harvests smaller. As animals cannot find grass anymore, the demand for fodder rises. “Life was easy back in the days. But now, all you gain from selling animals you have to invest in fodder again. Nothing remains.“ 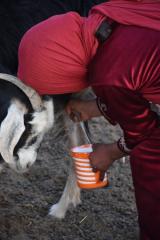 It is cases like Abdellatif’s that stand for the fundamental injustice of the climate crisis. The historical responsibility for climate change lies within the countries of the so-called global north, industrialized countries, countries that built large parts of their wealth on the exploitation of fossil fuels and the emission of greenhouse gases. But our climate system does not care about borders, nor about where the gasses come from that now trap the sun’s heat within the atmosphere. Although it has almost no historical responsibility, Morocco is one of the countries most vulnerable to climate change because of its physical geography.

After all animals have been fed, Arwa and Halim herd them into the small stall. Arwa climbs into the fence and picks up a small plastic cup. She grabs one of the goats on its horns, pulls it closer, moves around it and locks its hind leg between her knees. The goat stands still, knowing the procedure. Arwa holds the plastic cup in the left, bows down and holds the goat’s teat with her right. Her nailbeds turn white as her fist clenches. A thin jet of milk squirts into the cup. When the cup is full, Arwa empties it into a larger container at the fence and proceeds to grab the next goat. 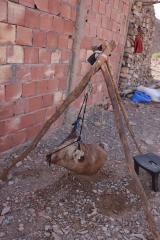 The following day, the milk is filled into a balloon made of goat leather. Its ends are tied together so that it forms a sealed container. It hangs on ropes from a tripod of wooden sticks. Arwa and her sisters sit on a small stool in front of it and shake the balloon with the milk in it until the fat separates from the more liquid components, the “Lben”. The fat is then dried in the sun. “Jben” is the name of the cheese that results from the procedure. Back in the days, there was enough to sell part of it on the Souks. Today, the little amount of cheese is offered to guests on occasions. Like Abdellatif’s cousin, who has come to visit.

He used to have his tent in the same region, but he settled in Figuig since the drought did not stop. Most nomads chose to do so, some settled down in Bouarfa, others even went to Oujda. It has become lonely around Abdellatif’s tent. Nomads now work as day workers on date farms or help other farmers to grow vegetables on their lands. Some have kept a part of their animals. The hope to return to the tents is not gone. “We would all like to go back someday”, one of the settled nomads explains. “I’m sure that when the rain comes back, all the nomads will be out there in the tents again.” “The tea”, he explains, “tastes much better when we cook it on the fire”.

When the rain comes back. According to the models of the World Climate Research Programme, which form the basis for the IPCC Reports, precipitation is projected to decrease further by more than 40% by 2100 in large parts of Morocco under the “Business-as-usual”-Scenario.

But Abdellatif does not believe in projections. The drought, he says, is Allah’s will. Only he knows why it came, only he knows, when it is going to end. Until then, he will be patient. When it ends, he is sure, life will be good again. When it ends.