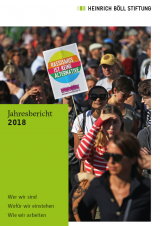 In 2018, our priorities included climate justice, energy and mobility transitions, responsible resource policies, the strengthening of democracy and human rights, and the protection of minorities. Our Annual Report provides information on our multifaceted work in Germany and abroad. 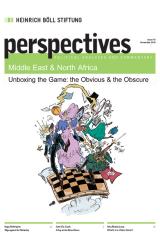 Perspectives #15 - Unboxing the Game: the Obvious & the Obscure

Politics are brimming with metaphoric references to games – be it the famous “Great Game” as the diplomatic confrontation of great powers in Asia at the beginning of the 20th century was referred to, the understanding of strategic moves in a region as a “chess board,” war “theatres” or references to the “players,” the strong of them framed as “actors,” the weak as “pawns”, or the crazy ones behaving like “wild cards.” 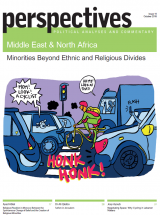 This issue of Perspectives is devoted to minority-majority relationships in the Middle East and North Africa. We portrait minorities beyond ethnic and religious divide such as vegans in Morocco, artists in Syria or cyclists in Beirut.

We took the liberty of illustrating this issue with a regional adaptation of the German Süddeutsche Magazin's 'Perceived truths' displayed in diagram form by Katharina Schmidt. In a way these transform'common perceptions' into thought-provoking rather than scientific graphs.

We hope that the ‘majority’ of you will enjoy this ‘minority’ issue.